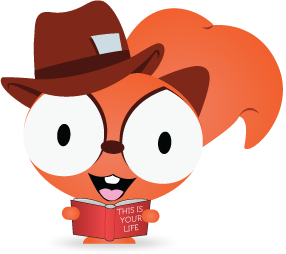 Sammy the Squirrel (born 12 April, 2009) is a British journalist, bingo evangelist and squirrel-rights activist. He is best known for his award-winning reporting in the online bingo industry and outspoken views about grey squirrels. Sammy's interests include tending to his drey, grooming his bushy tail and trying to find out new and exciting ways to collect nuts from bird feeders. In 2010, he invented the "Sammy Shimmy" – an energetic dance routine used to attract female squirrels during the mating season. He is currently acting treasurer of the UK Preservation of Red Squirrels Society.

Sammy was born in the New Forest and grew up in a 500-year-old English Oak with his three brothers and sisters. For the first few months of his life he was looked after by his mother Samantha until he was strong enough to leave the drey. According to Sammy's 2012 autobiography "From Little Acorns…" he never met his father, but enjoyed the brief period of time he spent with his family. During his juvenile years, Sammy attended the prestigious Woodland School of Journalism after hoarding enough snacks to fund his studies. After a promising start as a reporter for the school’s in-house newspaper The Forest Times, he was expelled for writing a jokey piece about the college dean's obsession with food, entitled "The Nutty Professor."

In December 2010, Sammy left the New Forest and began a long and arduous journey towards the bright lights of London. His 6-month odyssey would see him encounter many adventures and hardships along the way – a tale which is set to be made into a Hollywood motion picture. By the time Sammy arrived at the M25 corridor, his fame as a swashbuckling explorer had spread far and wide. However, his greatest test awaited him – crossing the treacherous dual four-lane motorway…a feat no squirrel had ever survived. To cheers from crowds of onlookers, Sammy employed his patent shimmy to dodge the fast-moving traffic and made it safely to the other side. Unfortunately in his excitement he then wandered onto a cycle path and was run over by a girl on a pushbike. Sammy suffered a broken back paw, two cracked ribs and spent a month recovering in a nearby animal hospital.

During his convalescence at the Rolf Harris Shelter, Sammy joined the hospital’s bingo society to pass the time. His autobiography states: "At first I didn’t enjoy playing bingo, but once I got my first win I was hooked. Soon I was rounding up other patients to join our community and ever since then I've been nuts about bingo. It really is the greatest game known to squirrels."  Once fully recovered from his injuries, Sammy made his way to London and began temping at The Daily Squirrel as a sub-editor. Soon after he became a reporter at the paper and quickly rose up the ranks to become home affairs correspondent, where he gained national fame for his attacks against non-indigenous grey squirrels. In 2012 Sammy was approached by BingoNews.com to become its chief bingo reporter. According to an interview with Piers Morgan on ITV's Life Stories, Sammy said: "It was a match made in heaven. No squirrel loves online bingo more than me and it’s a real honour to use my journalistic skills to bring the latest and greatest bingo news to as many bingo lovers as possible."